THC Juice for sale on Snapchat 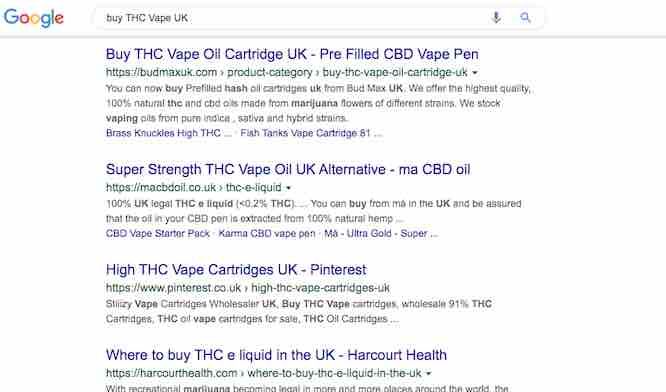 Children as young as 10 are able to buy cannabis products on social media, unpoliced by parents or any adults.
Dealers sell potent vaping juices that taste like sweets openly on social media platforms including Snapchat, Instagram and Twitter.

Accounts offering liquids containing “100% pure THC” the chemical that gives cannabis its psychoactive properties can be found in a few clicks using search terms such as “buy THC vape UK”.

But many of the e-liquids sold online are not made using cannabis and instead contain Spice, a synthetic form of the drug associated with zombie-like behaviour.

A user who added a Westminster-based dealer on Snapchat was offered tropical and cherry-flavoured THC liquids for same-day delivery. “You can use any vape pen while using our liquid and get high af “, he wrote, meaning “high as f***”.

Black-market THC “juices” typically cost £30 for a 10ml bottle or £50 for 20ml, but can be half that price. A 10ml bottle of standard e-liquid equates to about two days’ supply for a 15-a-day smoker.

The e-liquids are often sold in unlabelled bottles that can be used to top up the “tanks” of ordinary e-cigarettes. Others come in cartridges that slot into vape pens such as those by Blu and Juul.

On Snapchat, dealers can avoid detection by posting pictures of products that selfdestruct after being viewed. On Instagram, more than 94,000 posts have been tagged with the phrase #THCVape. Most are based in the US, where the products are legal in some states, but some are in the UK.

On Twitter, one Manchester-based seller offered “super strong THC” juice for £15 a 10ml bottle and wrote: “I can do deals if you buy 3 or more.”

Many sellers appear to have migrated from Facebook, which has stopped posts popping up in response to searches such as “buy THC vape”. All the platforms allow children as young as 13 to create an account.

One vaper, who asked to remain anonymous, said he bought THC oil, which can induce a sense of euphoria. “After smoking it for six weeks I got it tested, only to find out it was entirely synthetic. Dealers can easily get it online and are able to sell it on to kids who have no idea what they are vaping.”

The drug analysis lab Wedinos found that 70% of the THC and CBD e-liquids it tested, bought in UK cities from Cardiff to Carlisle, were fake. Of the 16 e-liquids it analysed, three were found to contain cannabis. Eleven were made with potent synthetic cannabinoids.

Vapers who tried the fake e-liquids before sending them to be tested reported side effects including auditory hallucinations, memory loss, paranoia and euphoria.

Published in Legal and Recreational

Based in Hong Kong, Yoyo covers Asia and the Pacific