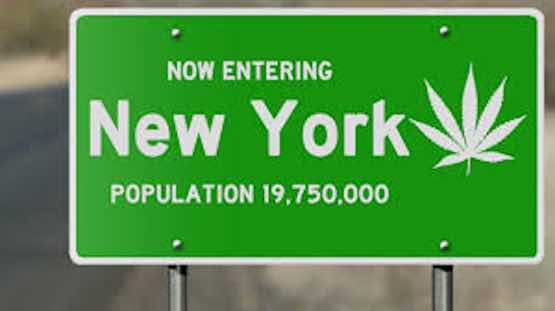 The New York Times says it has all but given up legalized recreational marijuana in New York this year. A month ago it seemed inevitable that both New York and New Jersey Governors would approve measures, but when NJ dropped, NY followed suit.

The two states were locked in a race to legalize, but last month the campaign in New Jersey abruptly collapsed, and Gov. Andrew M. Cuomo of NY declared that negotiations were too complicated; within days of New Jersey’s failure, the effort in New York, too, was shelved.

“New Jersey took the wind out of the sails in New York,” said Jeremy Unruh, the director of public and regulatory affairs at PharmaCann, a medical marijuana company in New York that had lobbied for recreational use. “I do think that was an inflection point.”

Kassandra Frederique, the New York State director at the Drug Policy Alliance, a pro-legalization group, said the slowdown was tangible.

“People are talking about it less,” she said. “There is no sense of urgency.”

A well-coordinated coalition of opponents, including law enforcement officials and parent-teacher associations, has warned lawmakers of public safety consequences. The pro-legalization movement has also been divided by a debate over how to guarantee economic reinvestment in minority communities.

Now, both states are preparing backup plans that involve expanding their existing medical marijuana industries. But there is mounting opposition. In New York, four counties already declared their intention to opt out of any legalization law, including both populous counties on Long Island. More than 40 towns in New Jersey have also declared they would opt out, or have already voted to ban marijuana businesses from opening there.

There are no models for what New York and New Jersey are trying to do. Of the 10 states that have legalized recreational marijuana, only Vermont did so through legislation rather than by ballot initiative. But Vermont does not allow commercial sales, effectively confining the drug to be grown in homes.

States that have already legalized marijuana through ballot referendums have run into problems: Emergency room visits rose in Colorado, the black market continued to thrive in California and every state saw vast racial disparities in marijuana business ownership.