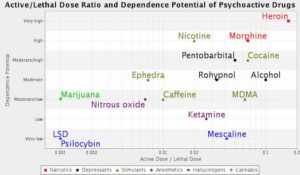 Although Cannabis is the least dangerous of all recreational drugs, it carries a low level of risk. Death from cannabis cardiotoxicity is rare but it does happen.

German researchers found that cannabis triggers heart problems that can killed a tiny number of people.

A coroner at Bolton Coroner’s Court ruled in December 2014 that Mr John O’Brien died from cannabis cardiotoxicity, a little known condition in which smoking cannabis triggers heart problems.
In Mr O’Brien’s case, smoking marijuana caused a massive drop in blood pressure which proved deadly.
Meanwhile a case report published in the journal Forensic Science International in February 2014 described the cases of two healthy men who died unexpectedly under the influence of cannabis.
Lead author Dr Benno Hartung, from the University of Dusseldorf, Germany, said a full range of postmortem tests corroborated the conclusion that the men died from cannabis cardiotoxicity.
They had a marked increase in heart rate that might have led to blood flow to the heart being blocked in individuals susceptible to this.
Writing in the paper, he said the assumption was the men died due to heart rhythm problems evoked by smoking cannabis, although they did not rule out that other factors may have predisposed them to heart problems.
The risk of a heart attack increases five-fold in the hour after smoking cannabis, he said.
He concluded: ‘People who are at high risk for cardiovascular diseases are recommended to avoid the use of cannabis.’

The drug can also affect young babies and unborn fetuses.

Thomas M. Nappe and Christopher O. Hoyte have published a case in a report titled Pediatric Death Due to Myocarditis After Exposure to Cannabis, in which they explain how the unidentified infant died of an inflamed heart muscle, or “myocarditis” after being exposed to cannabis.
Hoyte told Colorado’s 9News that they had ruled out all other causes that may have facilitated the infant’s death such as viruses, infections etc. But upon further examination they found THC, the main psychoactive chemical found in cannabis, in the baby’s blood and urine.

“Myself, our team, plus the primary team taking care of the patient, plus the coroner who did the post-mortem on the child,” Hoyte said, “And we found no other reason why this young kid ended up having inflammation on his heart,” he added.

According to the publication cannabis has been connected to myocarditis before, and the doctors pointed out the three cases in teenagers and young adults where cannabis use was suspected to have caused the inflammation. However, to date none of those cases ended in death.

Cannabis Toxicity has recently been extended beyond effects on the hart by anothert UK coroner – A mother-of-three from Bournemouth who was the first woman in Britain to officially die from cannabis poisoning.

Gemma Moss, 31, died after she was poisoned by the cannabis she smoked to help her get to sleep.
She had previously smoked half a joint a night to help her doze off, but had stopped for two years before she died, taking up smoking again before her death to help beat insomnia.
An inquest in January 2014 ruled her death was caused by cannabis toxicity, and a coroner recorded a verdict of death by cannabis abuse