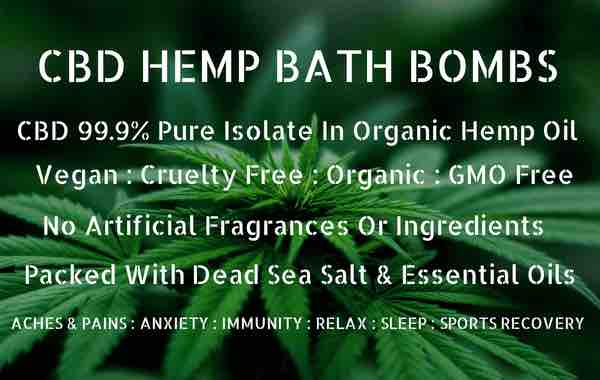 A bath bomb shop in East Kent which sells products containing CBD has had its PayPal and merchant trading accounts frozen because the cannabis oil is illegal in parts of the USA.

Jane and Mike Wood of BonneBomb said the payment giant’s decision led to them being dropped by other payment gateways including Braintree and Stripe and has affected card payments to their online store.

They started selling CBD products at the beginning of the year and the trouble with merchants started in June. When we tried to buy the bath bombs at a relatively pricey £14 each online today, we were directed to a page asking for a bank transfer. No other payment method was offered. However, US banks are not allowed to accept revenue related to cannabis so that route might also be closed off soon

“I got a phone call from our merchant Braintree in Philidelphia and they said ‘we noticed you are selling CBD products. We don’t allow that with our gateway. If you take them all off your website we will be able to continue working with you.’

“I said ‘How about I take your gateway off our website?’”

“Then we had an email from PayPal, because Braintree is a branch of PayPal. They said they were ‘happy at the moment’ because we were in such good standing with them, but they had to look into things. We continued a couple of months after and they only closed our account about three to four weeks ago with £83 still in it.”

A PayPal spokesman said: “As reflected in our Acceptable Use Policy, PayPal currently does not permit the use of our payments platform for the sale of products containing Cannabidiol (CBD)”.

An eBay spokesman said: “Products containing CBD oil are prohibited on eBay as there is no way to determine how much THC, which is a controlled substance, is in the product.”

The CBD oil isolate is one of 113 cannabinoid chemical compounds derived from cannabis.

Co2 is used to isolate it from other cannabinoids including THC – the active ingredient in cannabis that provides the high or psychoactive effect which makes the drug an illegal Class B in Britain and a Schedule 1 drug in America.

In separating it from THC, scientists believe they have harnessed pain relief properties . The resulting medical CBD comes in a much higher strength. It became legal for doctors to prescribe it in November 2018 in limited circumstances and from a certifiable source.

A UK case study is that of epileptic child, Teagan Appleby of Aylesham, whose mother Emma claims medicinal CBD Epidolex reduces her from 300 fits a day to five.

Much lower doses are legal and sold for cosmetic or herbal purposes.

As well as listing types of medicines created from medicinal CBD and their uses, the NHS.UK website says: “Health stores sell certain types of “pure CBD”. However, there’s no guarantee these products will be of good quality. And they tend to only contain very small amounts of CBD, so it’s not clear what effect they would have.”

A Guardian article cites market research commissioned by the thinktank Centre for Medicinal Cannabis (CMC), which estimates that the CBD market in the UK could be worth almost £1bn a year by 2025, equivalent in size to the current entire UK herbal supplement market.

The article claims sellers in the UK are careful not to claim any specific medical benefits for the products because of a lack of clinical evidence but a “giddy array of products” is making its way on to shelves and customers are being ‘taken for a ride’ with some of the doses guestimated.

Those sold by BonneBomb are sourced from an official merchandiser and are prepared with natural ingredients including hemp oil.

They are labelled as aromatherapy products with specified quantities of CBD – 12.5mg, 25mg and 50mg.

They say they want to show they are marketing them as responsibly as possible, sales to under 18s are prohibited and the products are separated on different shelves according to the amount of CBD in them. A certificate of analysis is on display in each section , provided by the wholesaler. This specifies the cannabinoid profile. If a trace of THC is present in the analysis this would be included and must be below the legal limit of 0.5mg, Mrs Woods said.

They say they are not allowed to sell products on the basis the CBD will help these complaints but, owing to the naturally healing properties of the accompanying products the labelling does pair bath bombs, salts, and rub on salves to ailments like migraines and arthritis in the way aromatherapy and homeopathic remedies are allowed.

Mr Wood said he believes one of the products has a positive pain relief effect on his arthritic knee. He told us using a bath bomb with 25mg of CBD gives him pain relief for three days.

As part of the restrictions of sale, they always maintain to customers this is not medicinal CBD and say they never recommend using it instead of traditional medicines.

Mrs Wood said: “One woman came in asking for something for her daughter who had given birth. I said ‘speak to the midwife first’.”

Mr Wood added: “A woman came in and said she had been sent there by her doctor. Another said her physiotherapist sent her here.”

Others are sceptical. Mrs Wood said: “I have heard one woman walk past the shop saying ‘They shouldn’t be allowed to sell things like that anyway.’ It’s people’s perception.”

The NHS.UK website lists types of medicines created from medicinal CBD and lists their uses for epilepsy, anti-chemotherapy sickness, and pain relief and adds: “Health stores sell certain types of “pure CBD”. However, there’s no guarantee these products will be of good quality. And they tend to only contain very small amounts of CBD, so it’s not clear what effect they would have.”

WebMD.com says “Even though many states have legalised its use, the federal government still considers marijuana and CBD products derived from marijuana in almost any form to be illegal. But so far, federal law enforcement officials have not used their power to swoop in and shut down marijuana operations in states that have legalised it”.

Published in Finance and Retail