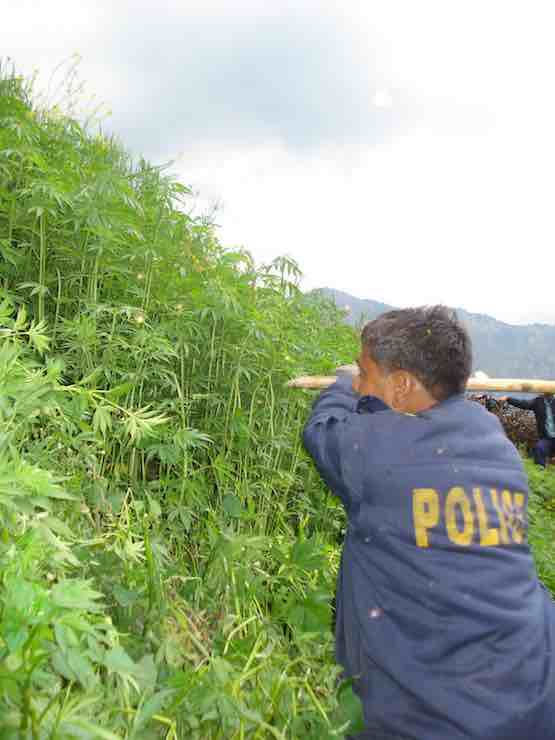 Narkand, India – Police and anti-narcotics agencies have been camping in the forests here for over a month in order to destroyed a thousand acres of cannabis plants in Kullu district, 500 kms north of Delhi.

The teams have destroyed cannabis plants on nearly 5sq km of forest and private land. They are destroying both cultivated and naturally growing cannabis. The poppy plants that can be used to make opium are also being destroyed. The campaign started on August 6 and will continue till October 4.

Police have booked eight persons for cultivation of cannabis on their private land while five have been booked for poppy cultivation. Police have warned people to destroy illegal crops to avoid facing arrest.

The season to extract charas from cannabis plants by rubbing its leaves between the palms and fingers has already started in Kullu. Fresh charas is being prepared and stored. Kullu is notorious for preparing world’s best charas which is world’s most expensive as well. Generally, some local residents grow cannabis in remote forest area, extract charas and sell it at cheap prices to criminal gangs, which further transport it to other states to fetch better prices.

The charas mafia hires people to grow and extract charas for them on contract basis. Malana, Manikaran, Kasol, Tosh, Nathan, Pulga, Fozal and Banjar are the hotspots for cannabis cultivation.

Kullu SP Gaurav Singh said apart from the local police and anti-narcotic teams, extra force from the IRB had been deployed to destroy the illegal crops.”Our teams are camping in the forest area. Cannabis plants from nearly 6,175 bighas have been destroyed and the campaign was still continuing.

Six additional teams of the NCB are destroying cannabis in Manikaran, Malana, Pini, Fozal, Banjar and Sainj valley and this campaign will continue till October 4,” he added.

Published in Growing and Legal

Based in Hong Kong, Yoyo covers Asia and the Pacific